Ask any photographer what their favourite subjects are to shoot and you will collect a wide range of responses.  Portraits, landscapes, nature, macro, sport….. the list goes on.  I myself have a few favourites – one of which is street art.  As someone who has studied art on and off since my teens, but sadly have never been particularly good at it, I am always in awe of those who do have talent, especially when it comes to realism.  Something that draws me to street art in particular is the transient nature of it.  The artists put their work out there in public spaces, knowing that it is only a matter of time before it is painted over.  These works will never hang in a gallery for generations to come.  Street art too, by its rebellious nature, often becomes a platform for free speech and political statement.  We are so lucky to live in the modern democracy that is Australia.

As this blog post has evolved, I have found myself resorting to more collages than I’ve used in previous posts due to the sheer volume of talent out there, and my wish to showcase as much as possible.

Melbourne is the perfect place to hunt street art.  In the city and surrounding suburbs it is everywhere to be seen.  The guide below is an excellent resource for anyone wanting to track down specific public artworks or artists.  The images within were chosen by the street artists themselves and one of my photography friends was thrilled to have had a couple of his photos selected.

I’ll begin by saying that while I do enjoy the general grunge of back alleys and their associated tags – I don’t personally regard tagging to be “art”.  Art is of course a subjective thing, and often has more to do with the intent of the artist than the viewer’s perception.  In my own mind, art should require a certain measure of talent and technique, as well as beauty (also subject to personal taste).  I guess what I’m trying to say is that I know what I like when I’m looking at it. I fully appreciate though that there’s a lot to be said for looking beyond initial impressions – there is surprising detail to be found in the oddest of places.

The above image is part of a public art installation in Footscray called “Blu Scray”.  There were photos of people in boxes pasted all around the town – I came across a guide in a council building that had a map of where to find them.  Footscray itself is a very under rated melting pot of world cultures, food and art.  This little side quest of mine one morning before work turned out to be a really fun morning, as the images below reveal. 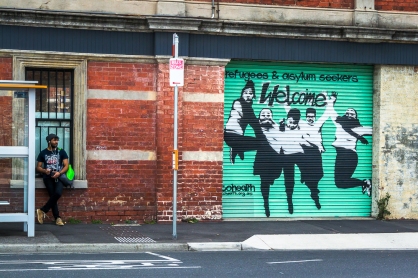 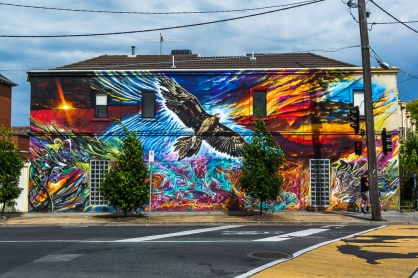 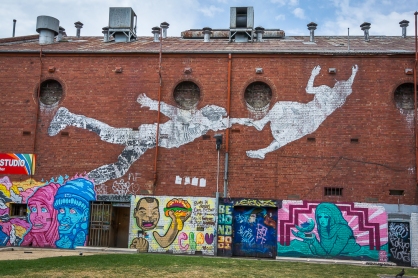 The magnificent piece of art (below) by Matt Adnate is located just off famous Hosier Lane in Melbourne.  It is five stories high and has stood the test of time (so far).  Matt is a world renowned artist, influenced by renaissance painters such as Caravaggio, and is passionate about his portrayal of indigenous Australians.  You can find out more about him here https://www.adnate.com.au/ . 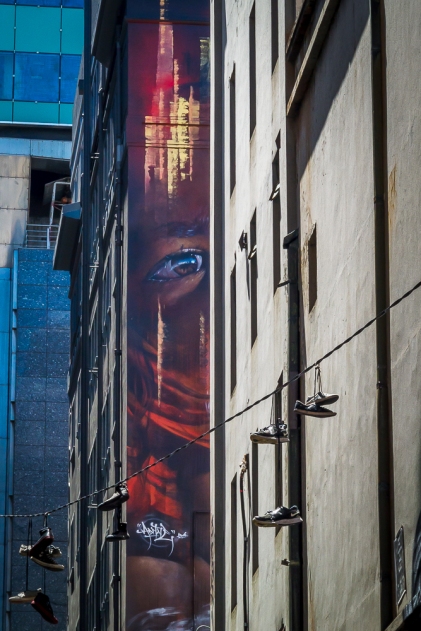 Hosier Lane is popular among tourists, with guided tours available.  I must say though, that in recent times the standard of “art” in Hosiers has slipped.   Maybe due to the popularity and “open days” which the council endorse.  I find there are greater treasures to be found in less well trodden places.

Other very notable suburbs of Melbourne are Collingwood, Brunswick and Fitzroy – in fact, this whole region is rich with incredible artworks.  I kind of came across these by accident one day when I dropped a camera off for repairs in Collingwood.  I found myself in awe at every turn of the corner – my head craning in all directions while driving, then taking off on foot to explore better. 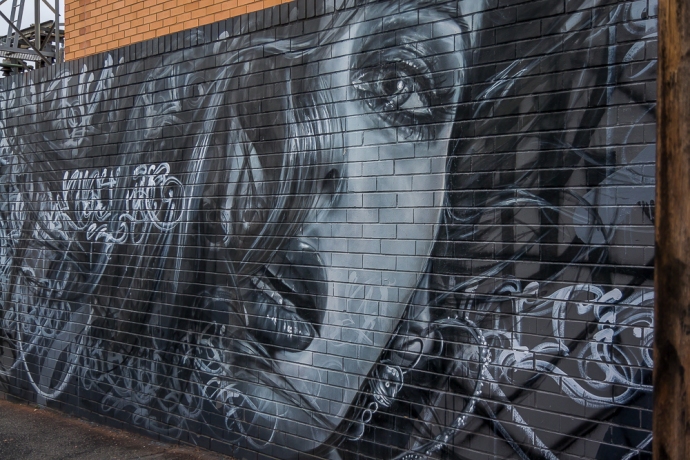 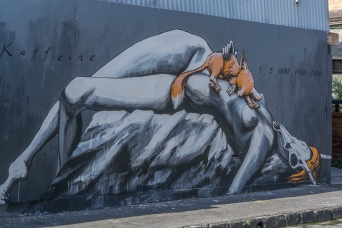 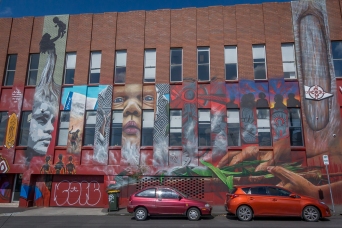 This is not an area you can discover all in one day.  I have ventured back several times, seeking out works I’ve seen in the book mentioned at the beginning of this blog, or ones that have been recommended by fellow lovers of street art.  I also took a group of people from my Facebook group “Amateur Photography Skill Sharing” on a day outing to Fitzroy  last year which we all very much enjoyed. 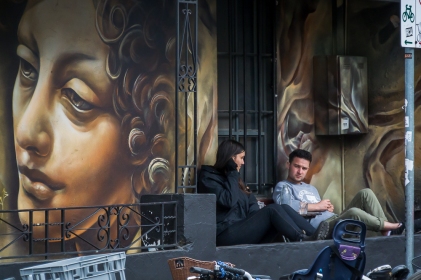 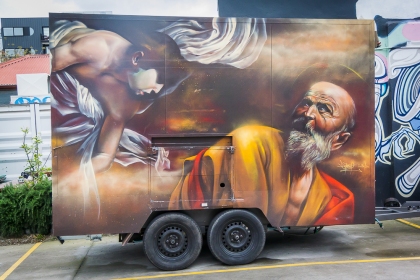 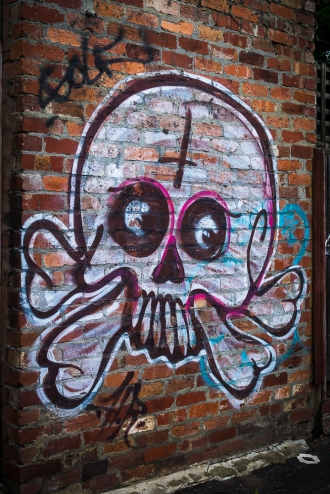 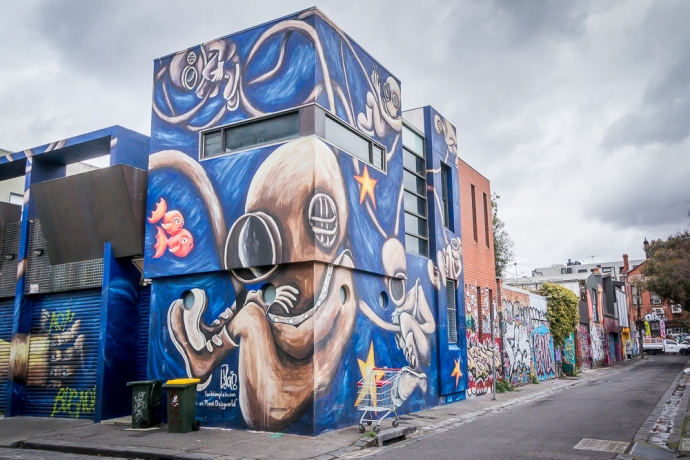 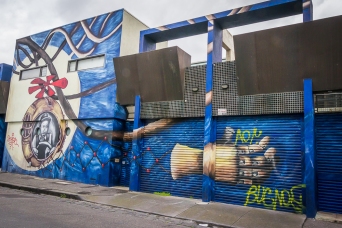 Street art has now ventured past the realm of the inner city and suburbs and is proving to be a major tourist draw card in rural Victoria.  Benalla (a little over 200kms north of Melbourne) now has an annual street art festival.  I visited this town a week too late for the festival this year but the artworks remain prominent in the town, drawing tourists to places in much need of the employment generated. 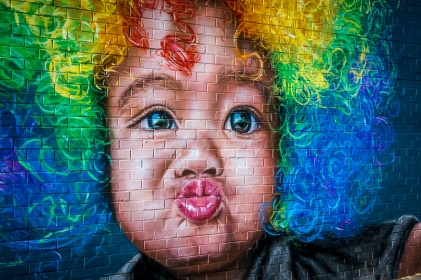 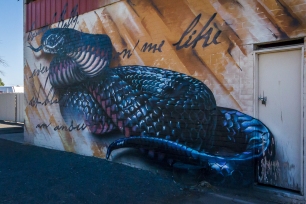 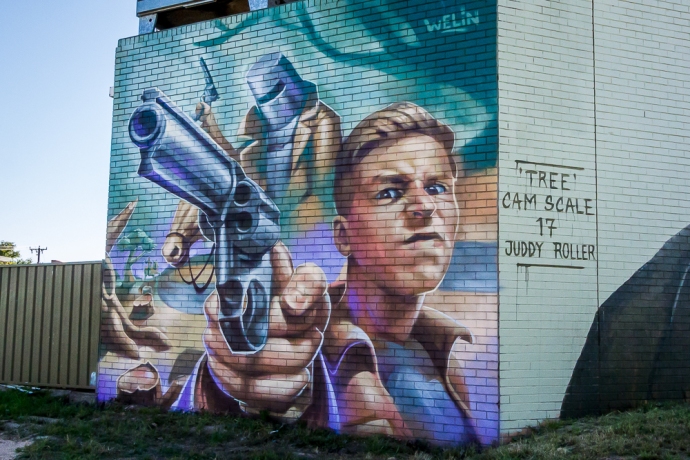 Finally – one major street art project to note is that of the Silo Art Project.  These works are enormous in their scale.  Australian and international “street artists” have been busy in country Victoria, decorating grain silos in country towns – again, breathing life into places which have been struggling to provide local jobs in a global economy. More often than not, the artists take the time to get to know the local community so they can accurately depict their stories.  I have yet to do this tour of Victoria but it is very much on the list.

One thought on “Melbourne Street Art”