The day began with another sumptuous breakfast cooked in our new camp kitchen.  Sometimes I think we eat better while camping than we do at home.

Today we were planning to knock off another of the major tourist attractions in the area – Jenolan Caves.  Again, this had been recommended to us by many people but the reality exceeded any expectations we had had.  In the past we’ve visited Buchan Caves in Victoria and Princess Margaret Rose Caves near the Victoria/South Australia border – both beautiful places – but they both pale in comparison to Jenolan.

The road into Jenolan is long, steep and windy, with spectacular views.  There are warning signs everywhere and campers and caravans and any trailers are not to pass a certain point.  Lucky we had left ours at home base.

All of a sudden, you turn a corner and you are there!  The entrance sure makes a statement as you drive over a bluestone bridge and through a massive cave. http://www.jenolancaves.org.au/

People are milling around inside wating for their respective tours to start.  We continue driving through as we need to park the car and buy tickets.  Once through the cave we are met with another jaw dropping scene – the heritage listed Caves House Hotel. 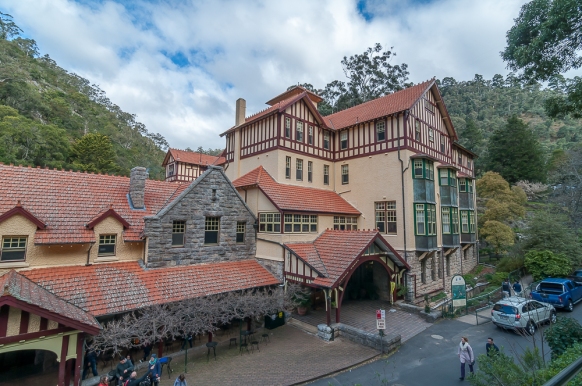 We had to park a fair way up the hill as the bottom car parks were full and soon found out that it also pays to either get there early or book tickets online.  Many of the earlier cave tours were booked out and we opted for a 12.30 tour of the Chifley Cave.  There are a LOT of caves to choose from if you arrive early but we didn’t really mind which one we did – I suspect they are all fantastic in their own way.  The attraction of the Chifley tour was that the groups were smaller, and spaced 30 minutes apart as opposed to 15.

Wayne, the Ranger told us it’s always busy on weekends and school holidays but long weekends are “crazy busy” with the ticket line sometimes an hour and a half long.

We had a bit of time up our sleeves beforehand so we grabbed a coffee and snacks and went for an explore.  Near the bridge there is a little riverside walk around a weir and a blue pool.  The water is blue due to the light reflecting off limestone particles in the water and is simply beautiful. 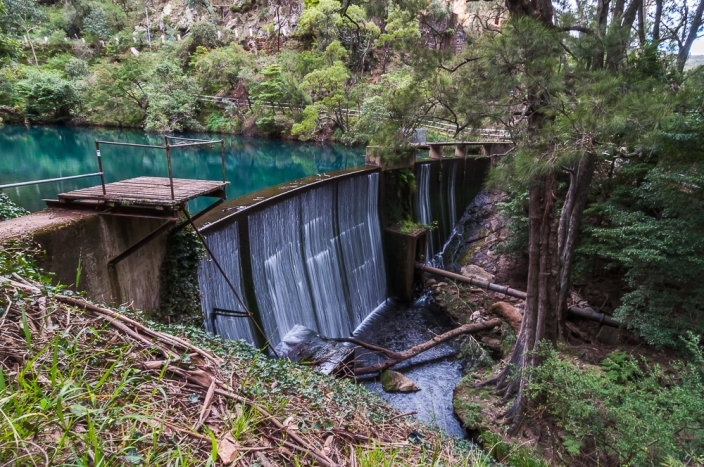 Two rivers converge near the bridge and run into this pool – the Jenolan and the Styx.  The Styx runs through the cave system and is probably the tour we would have chosen if it had been available.  I’ve had a fascination with ancient mythology since I was a child and just HAD to go down to where the Styx emerged from the caves and touch the water.  Adam did too.  We now say we have been to the gates of Hades and back.

It was now time to head back for our tour.

We were met at the entrance by our guide Ingrid.  She was very friendly and engaging and we were off to a good start from the get go.  After an acknowledgement of the traditional custodians of the land and strict instructions to NOT touch any of the formations inside, we ascended a few flights of steps and were soon inside the cave system.

Once inside, we moved from cavern to cavern via narrow corridors and steep steps.  Ingrid explained how stalagtites, stalagmites and other formations grow over millenia via the mineral deposits in the slowly dripping water.  She said a good way to remember which is which it that stalagTIGHTS hold on tight to the ceiling, and stalagMITES might one day reach the ceiling.

Many of the prominent formations have names.  I’ve always known this from other cave visits, but what I hadn’t realised was that one of the reasons early explorers named things was as memory joggers so that they could find their way back out of the cave systems. 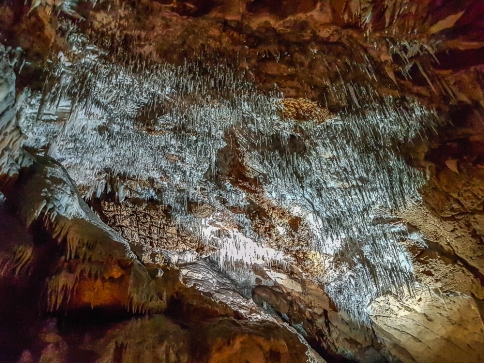 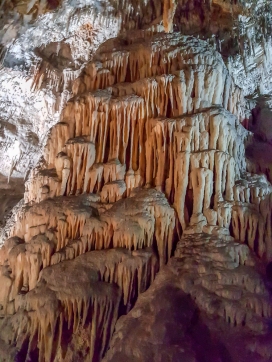 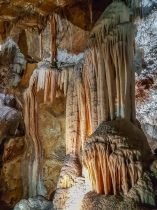 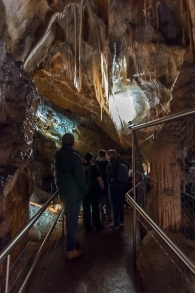 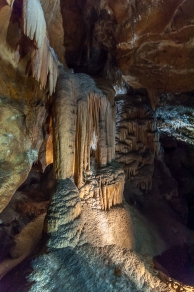 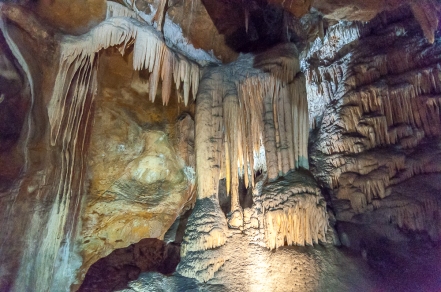 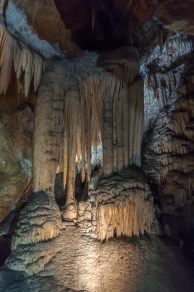 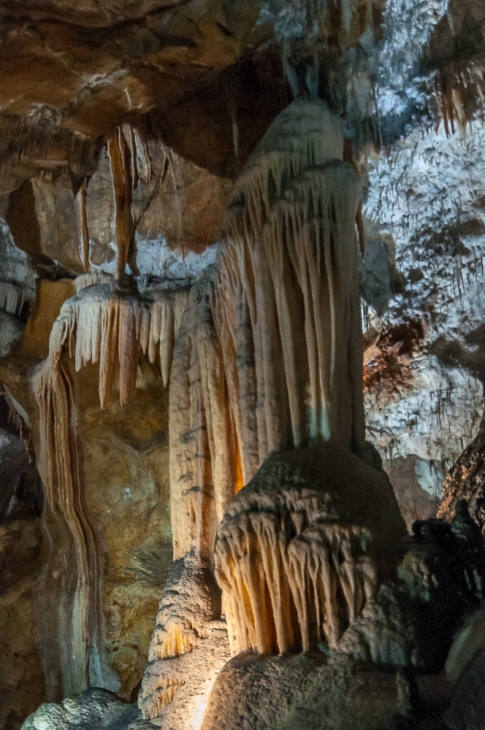 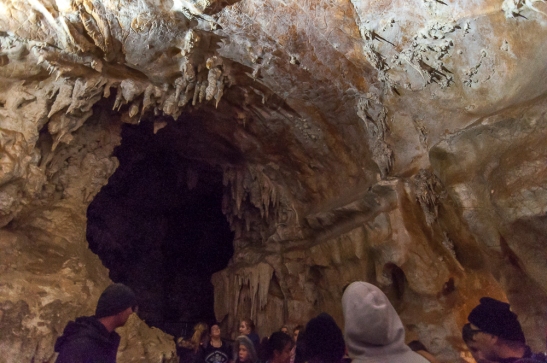 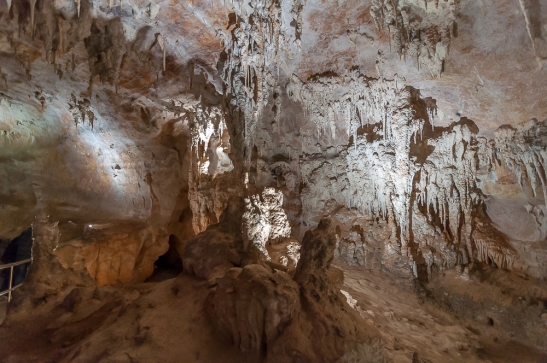 Chifley Cave was the first cave in Australia to have electric lighting.  Ingrid turned the lights off briefly so we could experience complete darkness, then lit a lighter to demonstrate how little light the first explorers of these caves had to work with.  Plus, we got to walk on smooth paths instead of rocky cave floors.  Funnily enough, when the cave first got electric lighting, people came to the caves to see it as it was a great novelty.  There is still one left – not the original globe but it is over 100 years old!

Incidentally, Chifley Cave is named after former Australian Prime Minister Ben Chifley.  Mr Chifley was native to nearby Bathurst and had a great love of Jenolan Caves – visiting often and helping to provide funding for infrastructure.  He was also inspired by the local hydro-electric scheme – perhaps a factor in developing the Snowy Mountains Hydro Electric scheme.

Below are a couple of photos attempting to show just how steep these caves were. 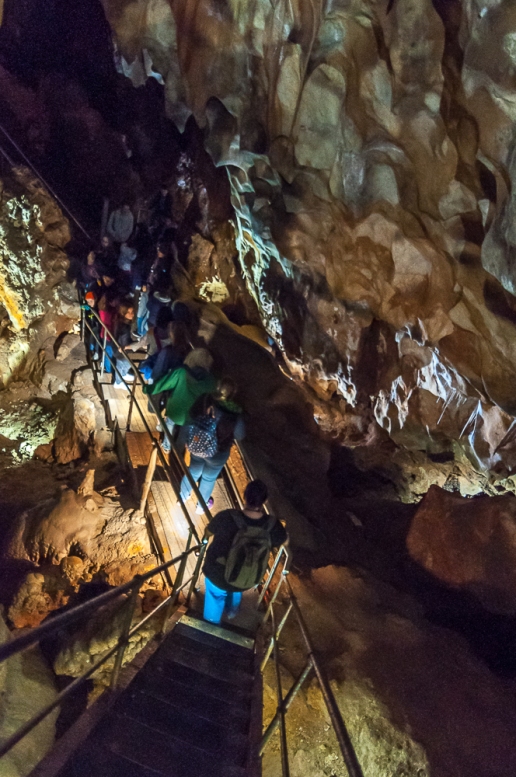 Again, I find myself marveling at the engineering feats of the place, as well as wondering what on earth posessed people to explore these remote regions and then venture under ground.  Certainly a different age to now.

There’s no way photos can convey the scale and grandeur of these caves – if you ever get the chance, please make sure you take the time to visit.

Here are Shaye, Brodie and Adam and the end of the tour.

On our way back up to the car we came across a group who were abseiling into a cave for an immersive experience, hard hats and all.  It looked like great fun and Shaye said she would love to do that one day. 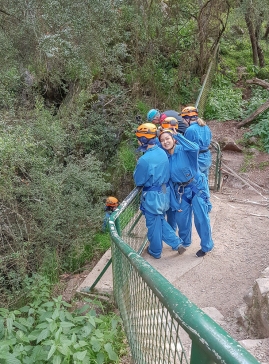 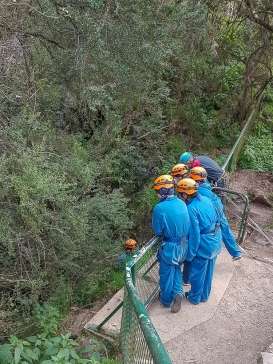 After some final photo opportunities we were once again on our way back to camp.

Tomorrow is our final day in the Blue Mountains and there’s a good chance of some waterfall visits.  Signing off for now. 🙂 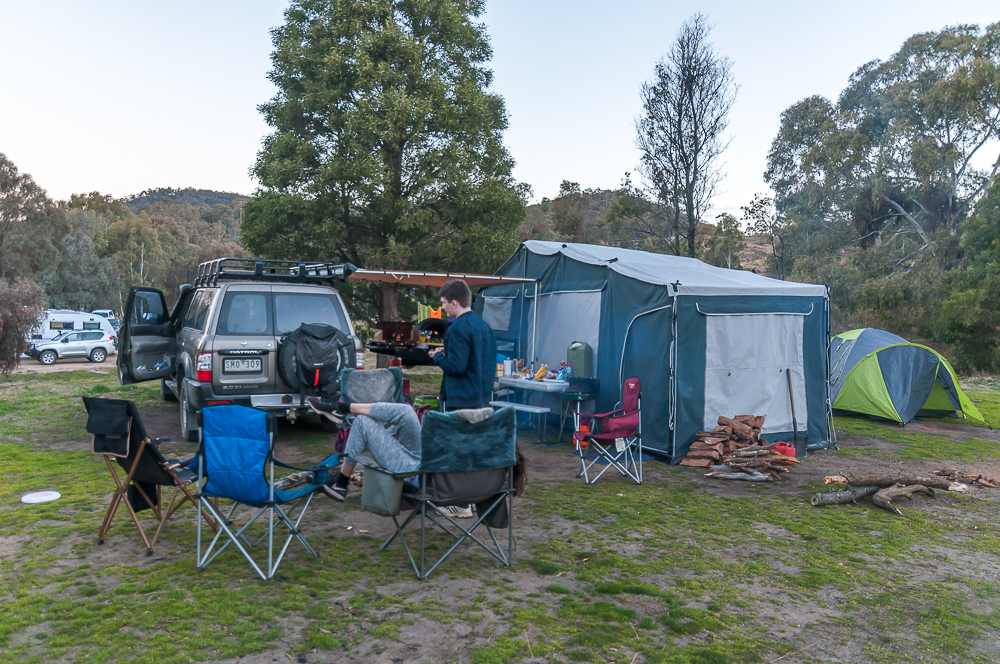