The journey began bright and early for Jamie and I, fuelling up at 5am.

We caught up with Lloyd & co at Melton a little after 5, then set off down the Western Freeway. Picking up a few people along the way, we were 7 cars in total with 3 more set to meet at Rainbow. 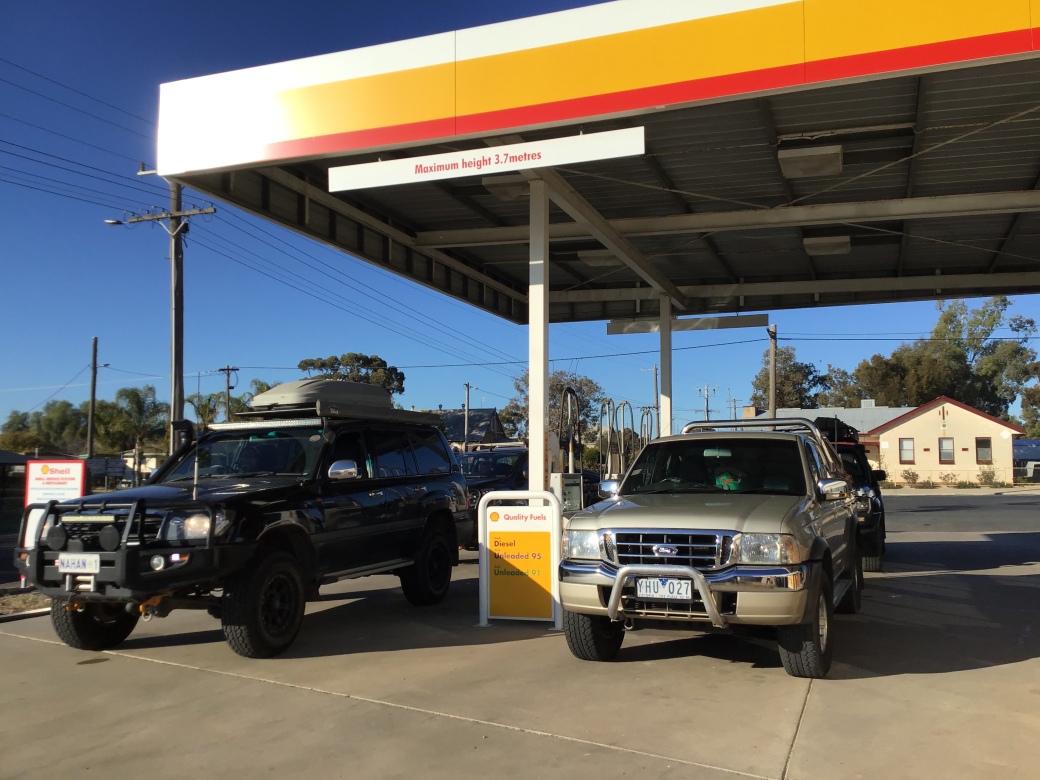 Once the group had assembled at Rainbow for a pre trip rundown, we set off as scheduled at 10.30 with Lloyd as trip leader and Karl & Yvette as TEC (Tail End Charlie). First stop was nearby Pella to check out the Lutheran church. Lloyd had arranged for a local bloke Mal to open up the church and serenade us with some tunes from the incredible 498 pipe organ built in 1855. We also had a browse around the small museum and left our gold coin donations. 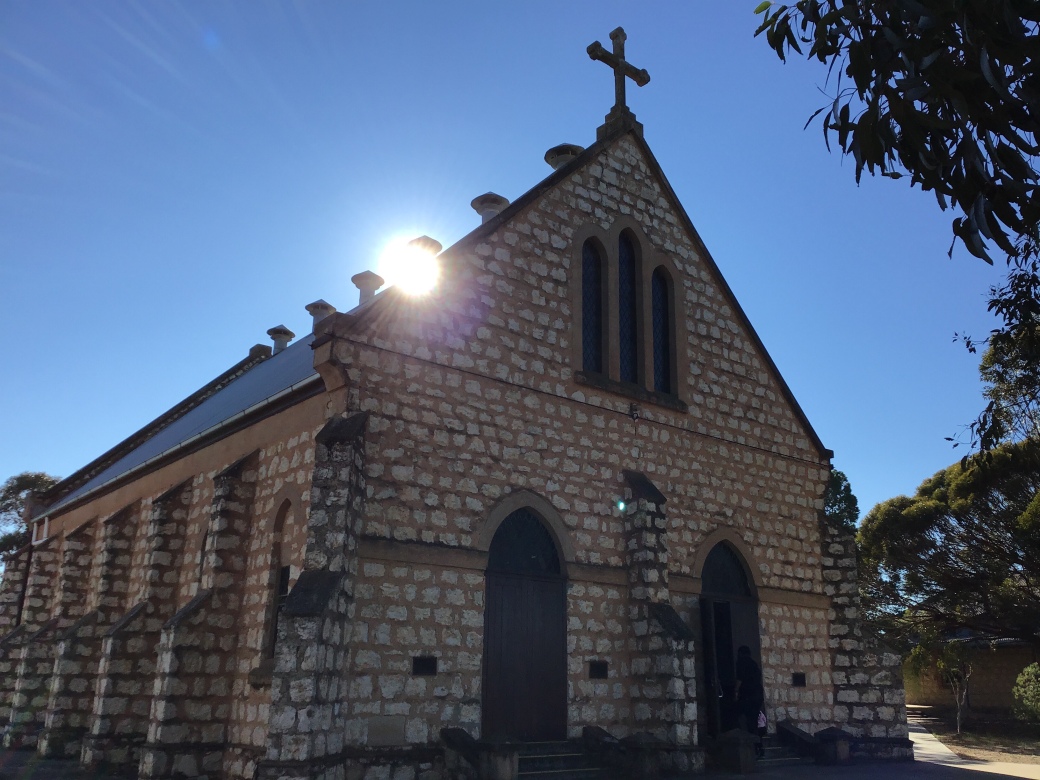 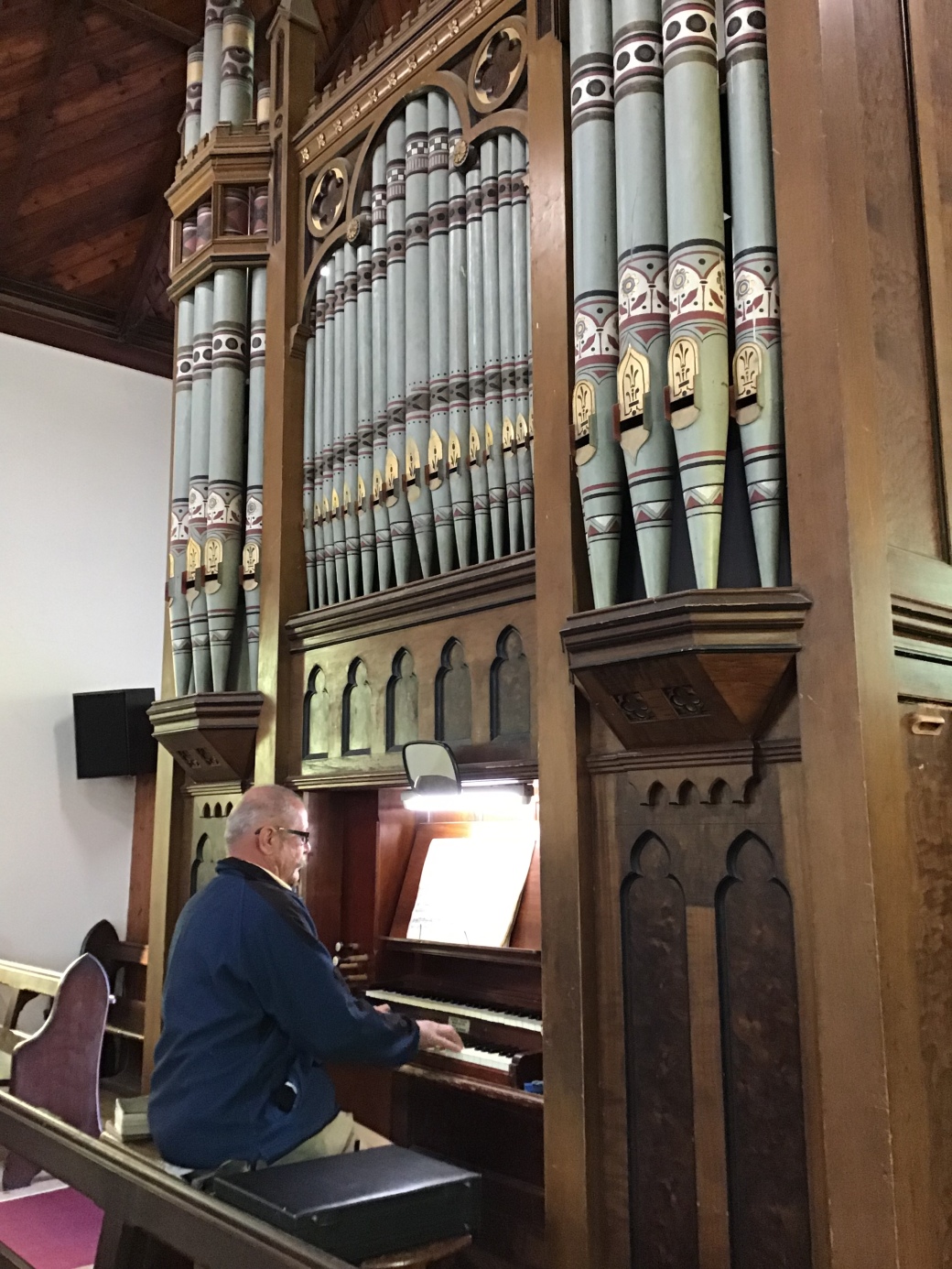 Back on the road, it was soon time to pull over and air down before heading up Milmed Rock Track. Sand flags were also added for safety on the dunes.

We enjoyed cruising along for a while through the sand and scrub, stopping off at Round Swamp for lunch. There were a few other groups of 4×4’s in the area and a couple of bikers. All in all though pretty quiet.

Conditions were variable, soft rutted sand in some places, firmly packed in others. There were even a couple of muddy bog holes to be found.

At one stage our convoy was up to 16 cars as we picked up an extra 6 cars for a bit, 3 in the middle and 3 at the end. Before long they dropped off again.

We had a quick stop at Arnold Springs to stretch our legs. While there we found some strange fruit like things on vines. Pretty sure they are “bitter apples” (otherwise known as bitter cucumbers or desert gourd) native to the Mediterranean Basin and Asia. There was a similar fruit (but bigger) at our lunch stop the next day.

So far the weather had been glorious and we were looking forward to clear, starry skies at night.

Milmed Rock is made of fossilised sandstone and is touted as Victoria’s version of Uluru. I think I remember Lloyd saying we might be able to climb it if we had time. Gotta say it was pretty underwhelming. We didn’t get out of the cars at all but from the photo you’ll see that most people probably would have been taller than this monolith. 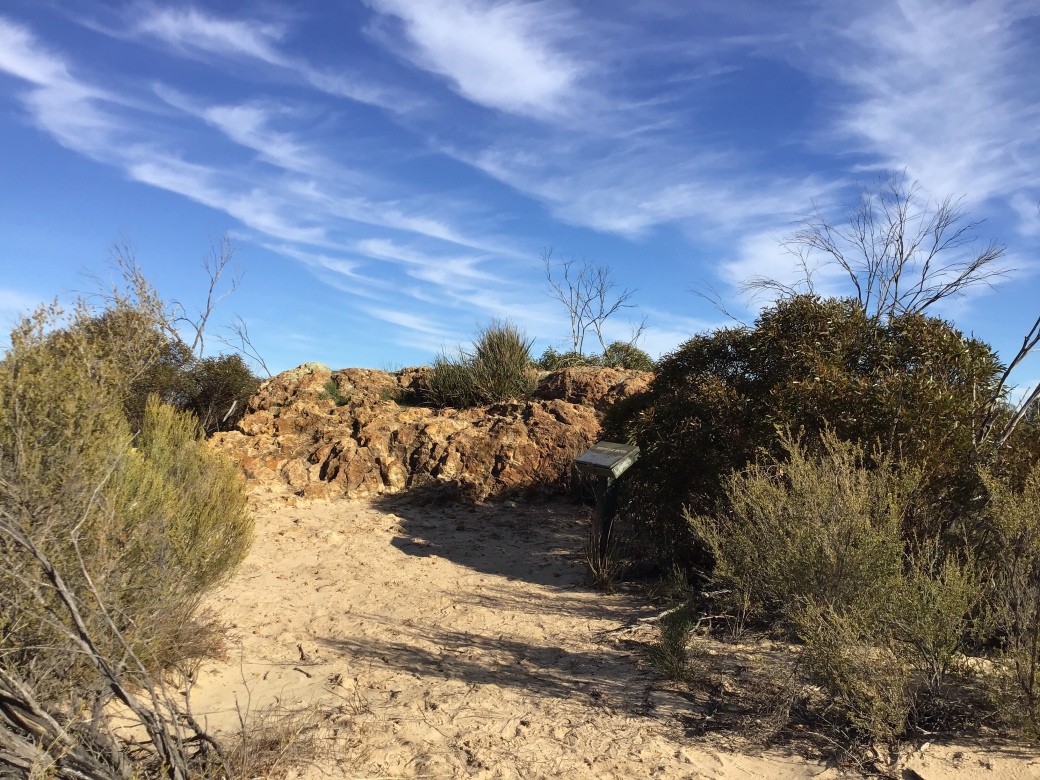 Camp for the night was at Big Billy Bore. This was an excellent camp site with clean long drop toilets, bore water and cooking shelter with BBQ’s. We each set up in our own private little corners of the scrub and came together around a communal campfire. Lots of laughs were to be had and by 10 or so pretty much everyone was in bed. 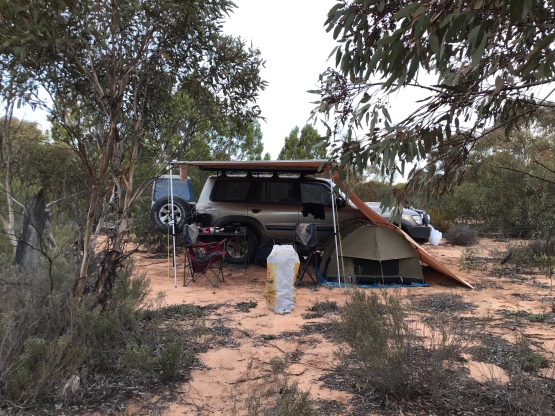 We did notice LOTS of holes in the ground from critters.  Some looked like ant hills but others were huge – the size of 10c coins and bigger.  We thought maybe spiders but didn’t want to think about it too hard.

Jamie woke me at 6.30 so I could take photos of the sunrise. Feeling well rested after a comfortable night in the swag, it was time to start the day. The sunrise itself was a bit dull so I did some yoga to greet the rising sun instead.  Yoga in the desert – what a fantastic feeling! We were all packed up and on the road by 9.30. Paul moved to TEC today as part of his training.

Back into the dunes Jamie made the comment that he half expected to go over the next dune and see the beach. It’s that kind of really nice, soft sand and scraggly vegetation you do associate with the coast and other people agreed they’d had the same thought.

Not far into Bore track, Larry was kind enough to get stuck in some soft sand. Even though he could probably have backed up and tackled the hill again, the group took it as a good opportunity to do some recovery. Under Mick’s guidance we analysed the situation and talked through strategies and risks. It was Paul’s turn to be in charge and his first tactic was for Larry to change into 4×4 low, back up a little and see if he could move forward slowly. Great idea and it worked a treat.

A short way along the Border Track we stopped for lunch next to Scorpion Park – apparently home to a 26km endurance bike track and made for ATV’s. Love the street sign – Shagga St. 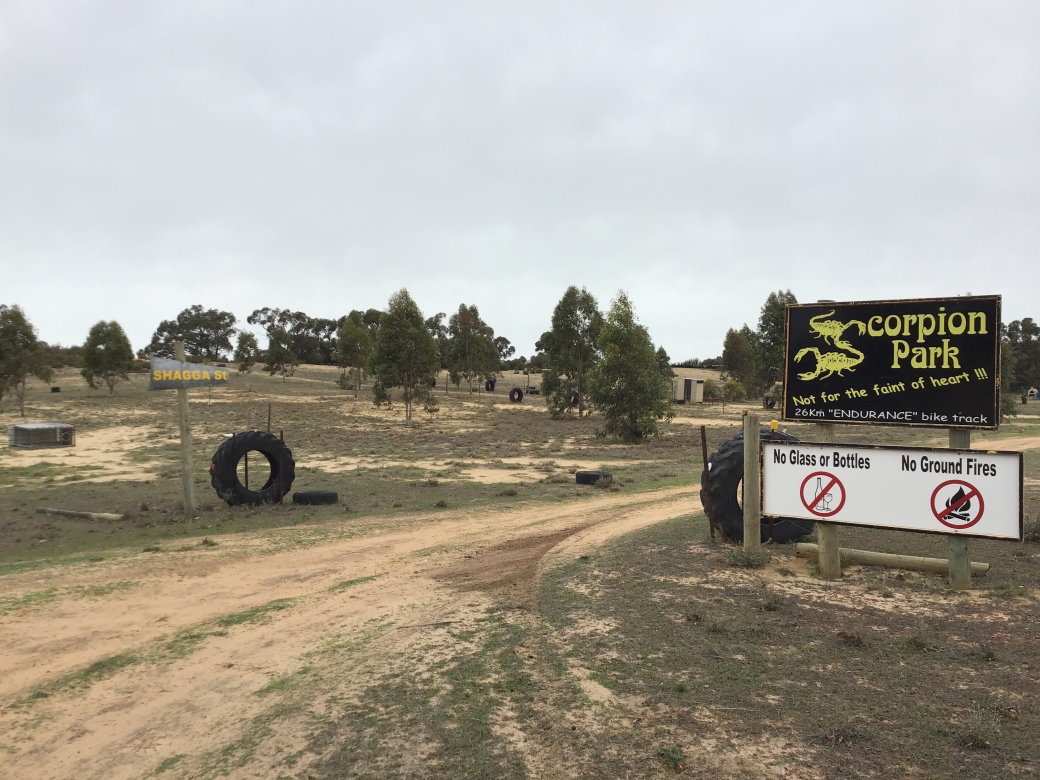 Clouds had been darkening all day and it started to rain at this point so we were quickly on our way again and into Ngarkat Nature Reserve which we had all bought day passes for. 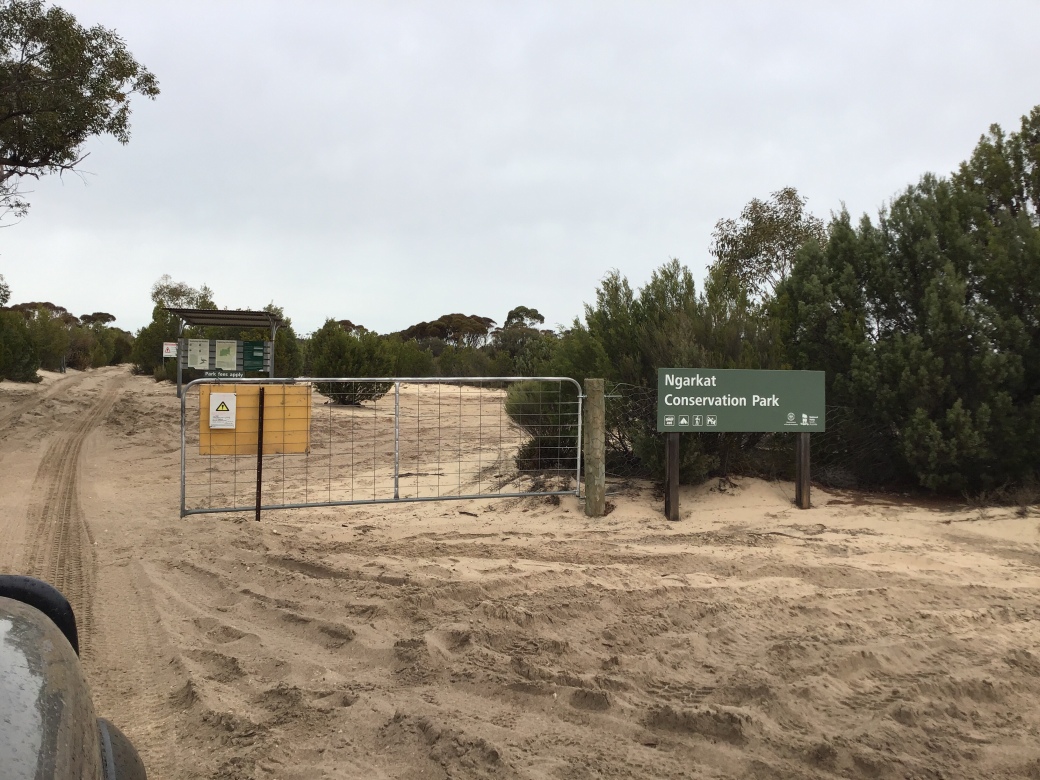 Of course we had to stop to check out the trig point along the way. 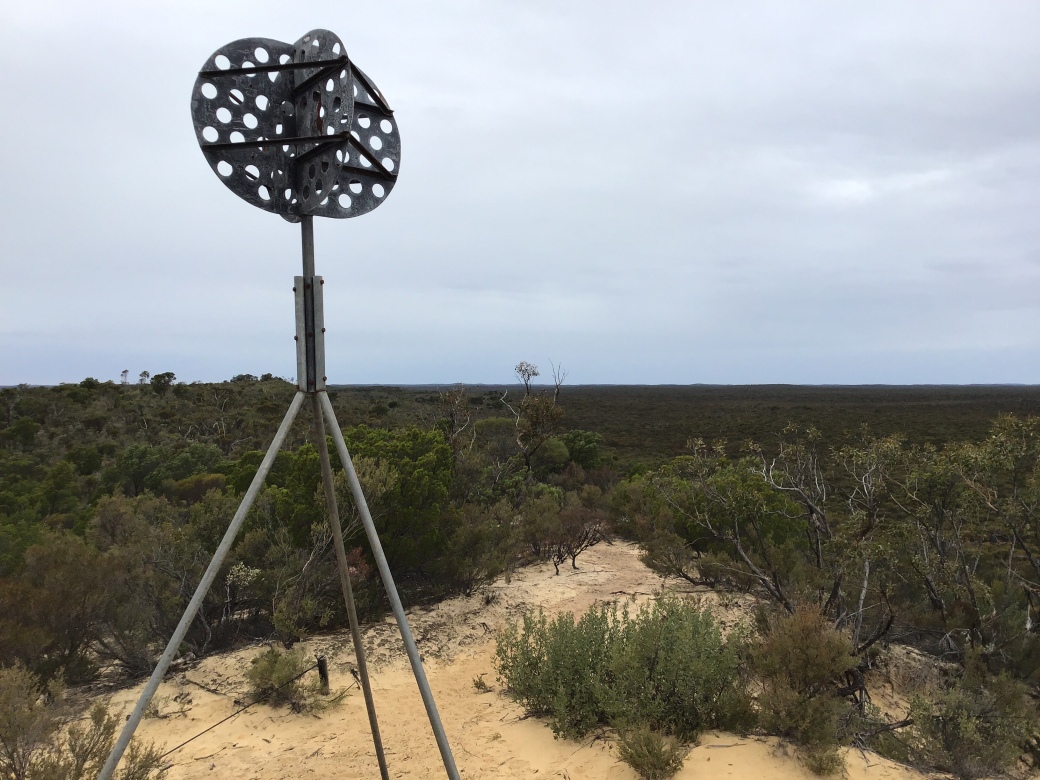 Chicken track went to the right, to the left the hill had at least 4 tracks leading up – all of which looked pretty challenging. Most of us opted to take the right. It was about here that our esteemed TL got snagged. This provided Karl with the perfect chance to practise his recovery skills. John Fleming was the only one who took on the tougher track and said it was probably a good thing we didn’t all go up there or we may have been out all night.

A short time later, Suhan put a call out that he had to stop to check something with his car. Turned out to be a badly punctured tyre which Paul as TEC stopped to help him out with. Mick and Tim waited nearby in case any more help was needed and the rest of the group pushed on with Mr French as TEC.

It was pretty slow going down Border Track and the rain stayed with us on and off.  We ended up getting to Red Hill Campground after dark. John and Alison had pushed on ahead and secured a spot big enough for all 10 cars. No mean feat as the camp ground was pretty full.

After a long day I thought everyone would be off to bed early but once again we all sat around the fire and enjoyed a talk and a laugh. We even had 2 fires as we had to stretch out in a long oval due to limited space.

After a good night sleep we were packed up and ready to tackle the last leg of the trip. 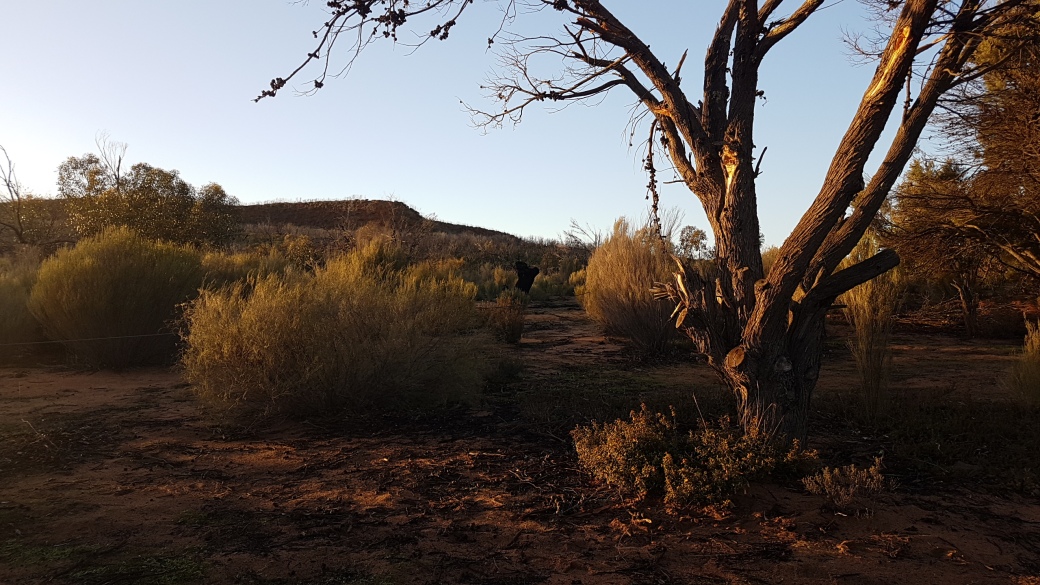 Only a few hills on this leg and we were treated with a spectacular view when we crested this one. We all took it in turns to stop for a photo, then continued west.  The photo really doesn’t do it justice. 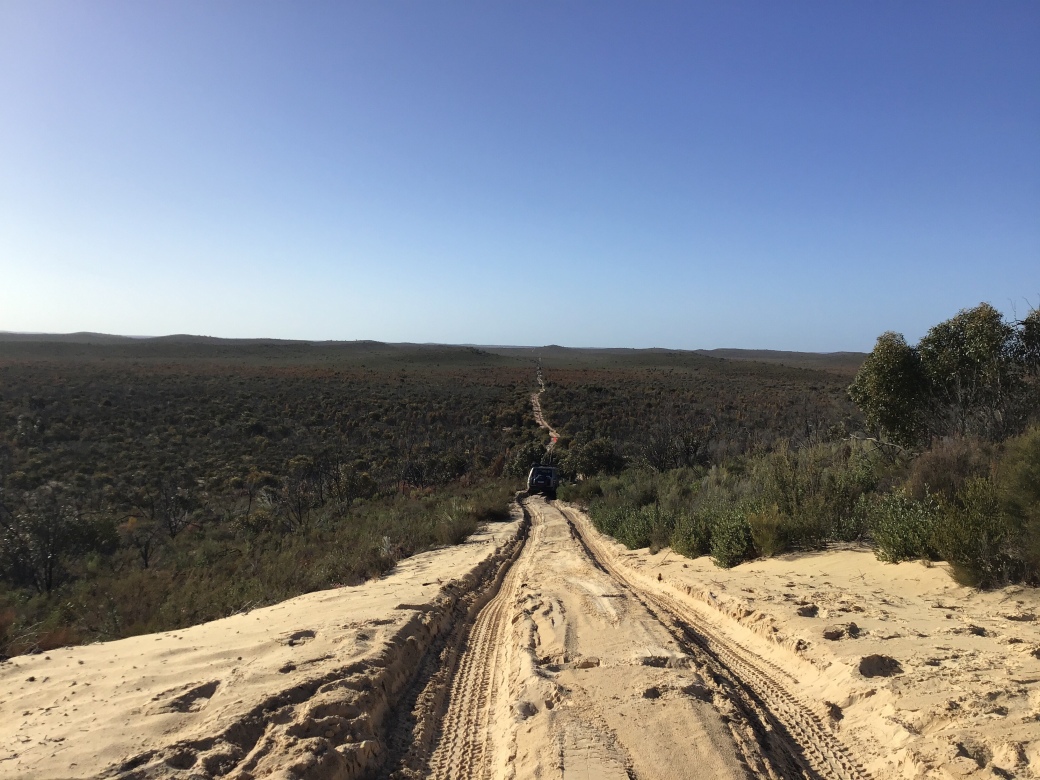 About 50k’s later we reached the Nhill-Murrayville Road and were soon airing up at Broken Bucket Camp Ground. Not a bad little spot, with a loo and water tanks – plus a very photogenic windmill. 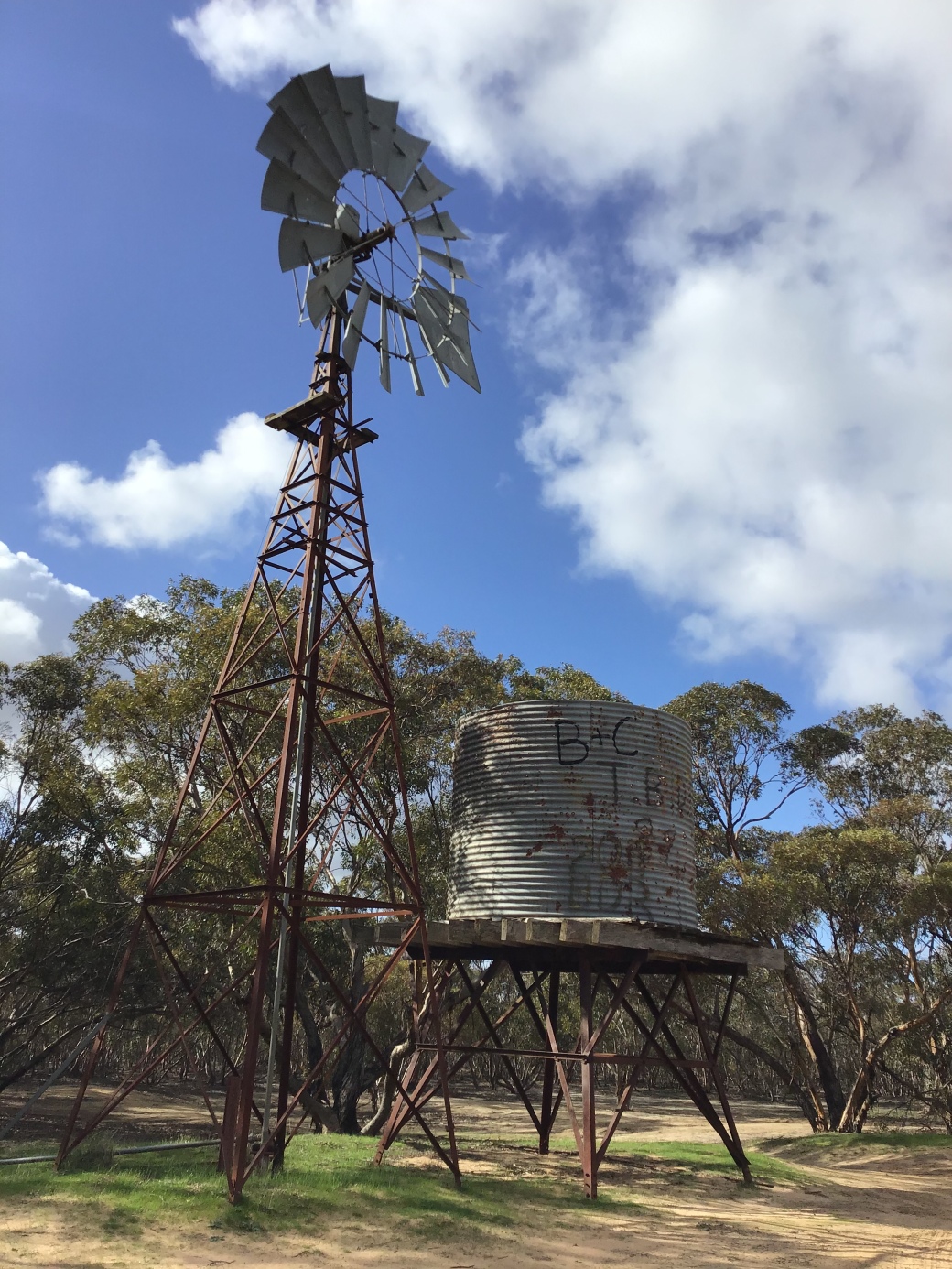 It was here that Lloyd called the trip, as we were now back to the black top. From there people could either head straight home or get together in Nhill for lunch. Jamie and I grabbed a pie at the bakery and said our goodbyes.

Thanks to Lloyd for another fantastic trip. Jamie and I hadn’t been up through this area before and thoroughly enjoyed it. Thanks also to everyone else who came along and made it a fun weekend. Some stats of each day are below – courtesy of the Hema app. 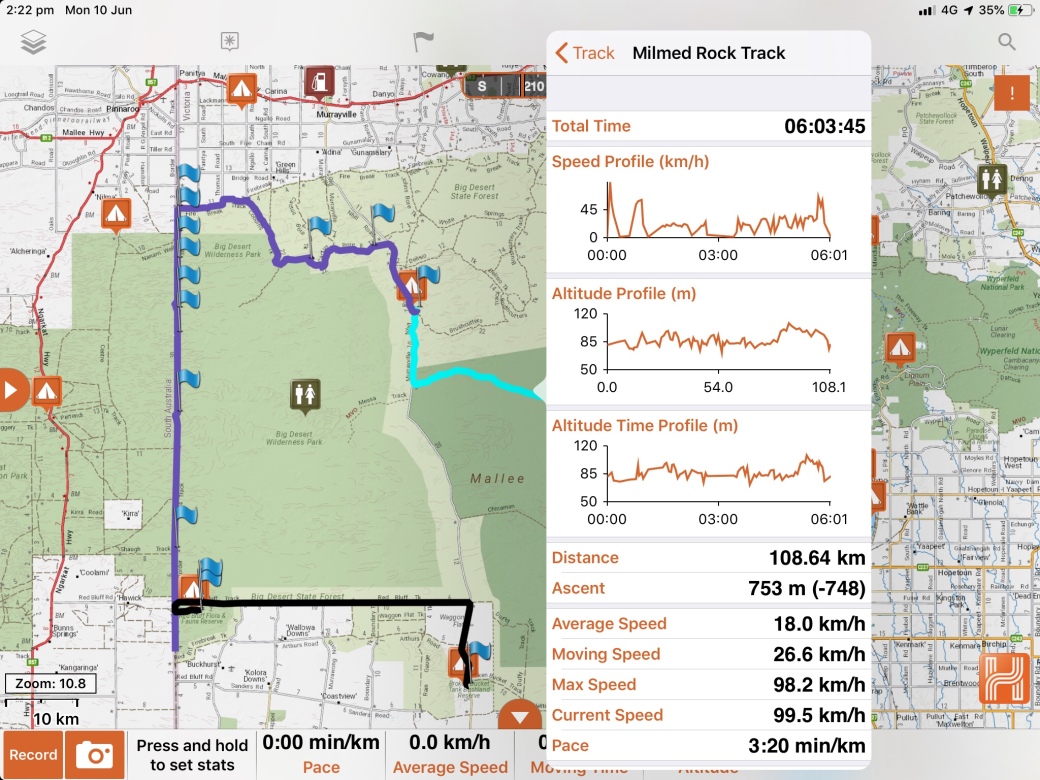