Day 2 we awoke to the sound of rain on the tent.  Not a big deal – we’re used to camping in all kinds of weather conditions.  Can’t say we’ve been impressed by Forbes at all.  The waterways look nice from the main thoroughfare, but the free camping is down the stinky end.  Smelled a lot like untreated grey water to me.  Barely tolerable for a free, one night stay.

The sewerage didn’t seem to deter the birdlife though.  Brodie excitedly pointed out a flock of pelicans to me.  Around 10 or 12 of them were swiming along together gracefully.  What was really funny was that every now and again they would all simultaneously go “bottoms up”.  They must have been algae feeding – not behaviour I’ve seen in pelicans before – I thought they ate fish only.  Such beautiful creatures. 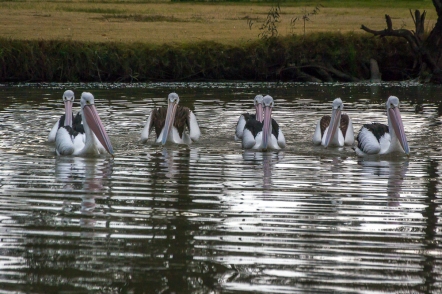 Anyhow, my tummy was grumbling by now.  I’d had a warming cup of tea and then Jamie got up and made me brekky :).  Let me say – food while camping is no boring fare for us.  On the menu today was bacon, egg and tomato atop a slice of home made sourdough, with a side of mushrooms and wilted spinach.  Why on earth would I want to go to a cafe?? 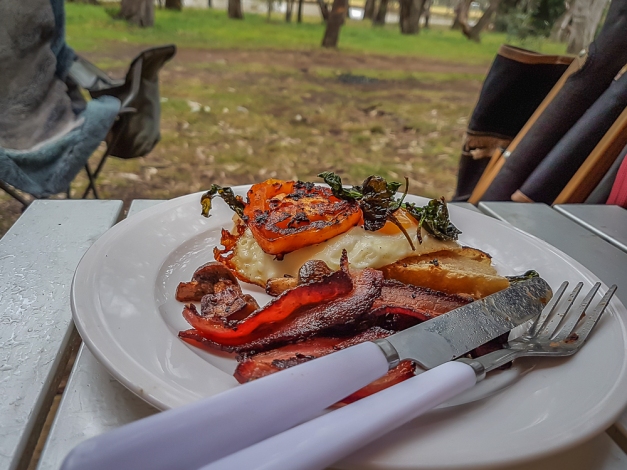 On a more sombre note, I mentioned last night that we had a visitor – Steve.  Steve was camped near us, and Jamie gave him a bit of a hand.  Seemed like a guy pretty down on his luck and had quite a story to tell, including divorce & disability.  I think Steve spends a lot of his nights here.

We had been meaning to throw out a camp chair which was damaged.  Jamie thought it might be better to give it to Steve rather than bin it and he could get a bit more life out of it.  He was really appreciative.  All this had happened in the evening – in the morning, in the rain, this is what Steve’s camp looked like.  It looked exactly the same when we left around midday.  Steve was in there somewhere, among the puddles.  It’s a reminder of how so many people are doing it tough out there, and each person has their own story to tell.

Our pack up was wet, cold & a bit stressful.  The boys bickered and Shaye was tired and grumpy.  We are still fine tuning pack down with the new toy and haven’t quite perfected it yet.  We’ll get there as we always do. 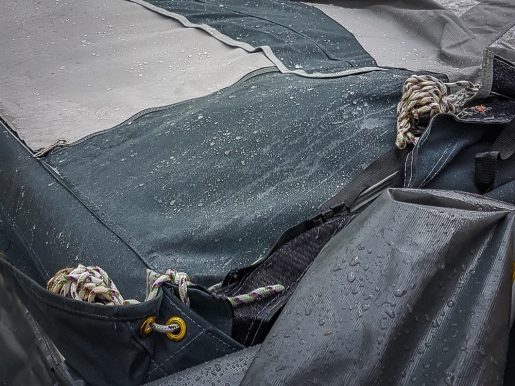 After a tourist info visit and fuel stop we were off…… next stop – The Dish at Parkes http://www.parkes.atnf.csiro.au/.

The Dish is a 64m diameter parabolic dish which was built in 1961.  Due to contiual upgrades, it is now more than 10,000 times more sensitive than when it was first commissioned.  The Dish is most famous for it’s involvement  in the 1969 moon landing, as it was the vehicle for beaming those first images from Apollo 11’s mission to the moon. Unless of course you’re a conspiracy theorist in which case the whole thing was a grand hoax. 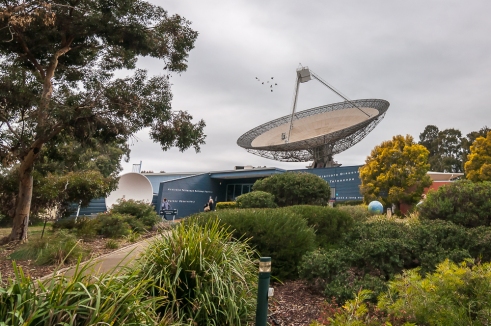 The Dish is really, really big and can be spotted from miles away on the approach.  The visitor centre is free to enter and browse at liberty.  There is quite a lot to see there, including movies on space.  The kids loved it, partly due to the gift shop, and partly due to the science focus.

Even the gardens had a science theme with cool activities and also the apple trees are directly descended from the tree of Newton’s apple.

There were “whisper dishes” spaced about 100m away from each other where you could talk to each other by whispering into the dishes.  Of course, Adam opted for loud fart noises instead of whispers while Jamie and I avoided eye contact and slunk into the shop.

We were lucky while we were there to see The Dish move a lot – according to another tourist we were talking to, it doesn’t move like that often. 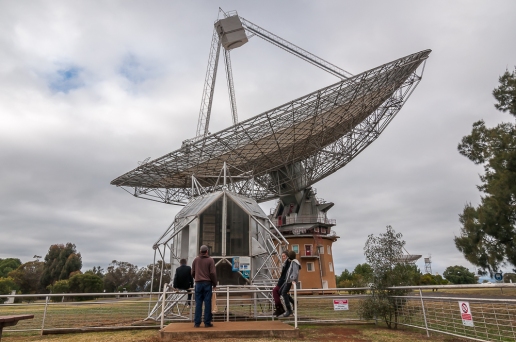 We had planned to cook a nice hot noodle lunch in our boot at The Dish.  In reality it was a bit too cold and windy for outdoor cooking.  We had a look at the cafe and found the food to be over priced for average quality.  Keen to get to the next campsite we bribed the kids with the prospect of the old reliable – Maccas.

Little did they know, Maccas was still some way away, as they discovered 60kms away when the first billboard appeared.  I wish I’d got a photo of it – they reckon it was just plain mean. Lol.

Our campsite at Dubbo is a private property next to Dubbo airport.  Blizzardfield, owned by Jan & Peter Watters.  Another Wikicamps find – the reviews were good, the cost was low, and we could feel secure in leaving our gear behind when we head out to do the touristy thing tomorrow.

The weather here tonight is mild, as is the forecast for the rest of the week.  I’m enjoying my glamping, laptop, blogging and wine, while Metallica music plays gently in the background.  Oh, and dinner was magnificent, with perfectly cooked steak and yummy salad with a tangy Lebanese dressing.  No pics – you’ll have to use your imagination for that one. 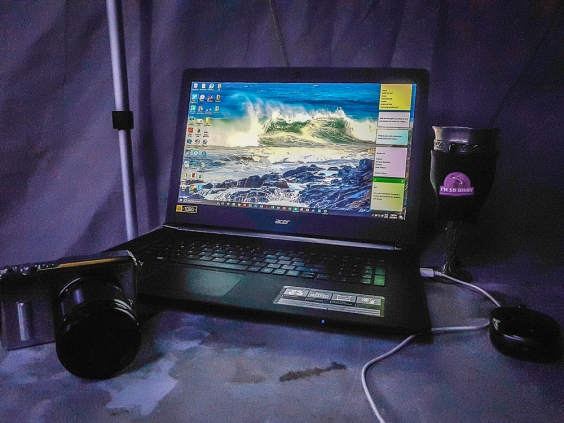