I arrived at Mount Franklin (an extinct volcano nestled in Victoria’s Golden Triangle) not really knowing what to expect a “Free Food Foraging” workshop to look like, but straight away this inviting assortment of goodies grabbed my attention.  I was in the right place.

I first came across Free Food Foragers by word of mouth on the social media grapevine.  There had been a discussion in a local fungi Facebook group (Flora, Fauna & Fungi of the Macedon Ranges) about whether or not a particular photographed specimen was edible.  Admin of the group, Greg Boldiston advised that the best local expert on edible fungi he knew of was Ingrid Button of Free Food Foragers.  One thing led to another and a quick Google search informed me that not only was she a local expert – she ran workshops!  Myself and hubby were soon booked in.

Upon our arrival at Mount Franklin the second thing that stood out to me was Ingrid herself.  A tall, blonde woman who really rocks her Viking heritage, Ingrid’s wicked humour, wealth of knowledge and passion for foraging was quickly evident. 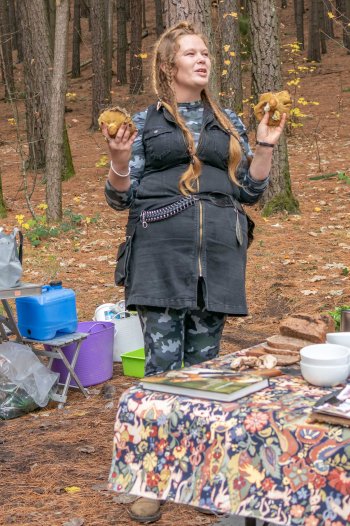 This first workshop I attended was a beginners guide to edible fungi.  Ingrid talked us through 2 fungi which are regarded to be foolproof – slippery jacks & saffron milk caps.  Both these fungi grow exclusively in pine forests, of which Mount Franklin has plenty.  I must say, slippery jacks (left) are pretty ugly.  A lot of people swear by them though and they are popular among foragers.  Far from being a culinary delight, Ingrid’s advice was that they are much better dried.  Saffron caps (right) however are delicious and impart a beautiful delicate orange colour to dishes. 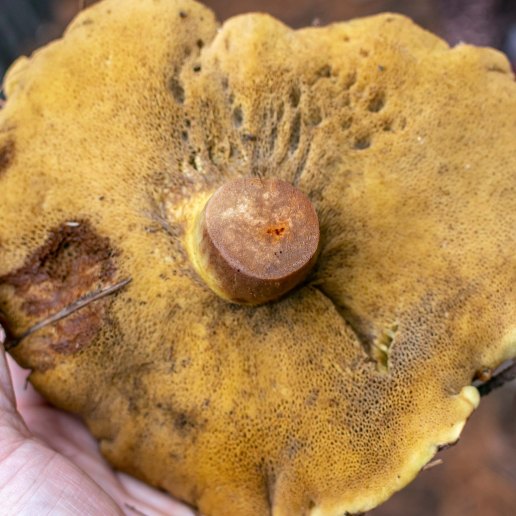 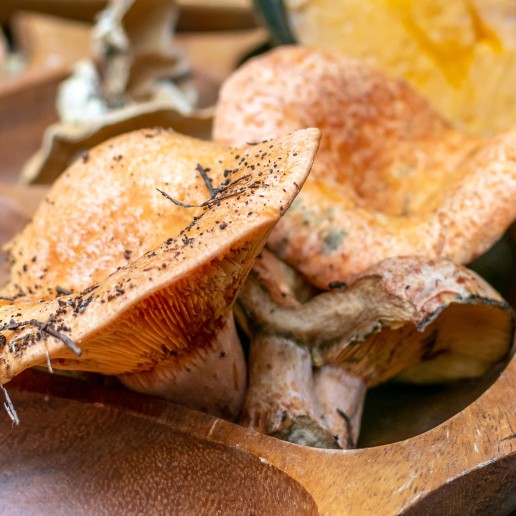 Once Ingrid’s initial spiel was done we set off for a walking tour to see what fungi and plants were around.  I’ve been visiting Mount Franklin regularly for around 30 years and never realised just how much produce had been readily available – literally right under my feet.  Pictured below are wild mint, turkey tails (bracket fungi), sticky weed and a relative of enochi mushroom. 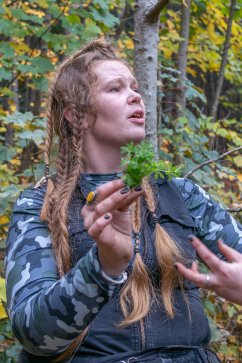 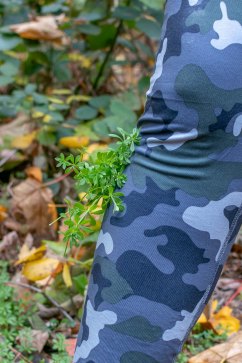 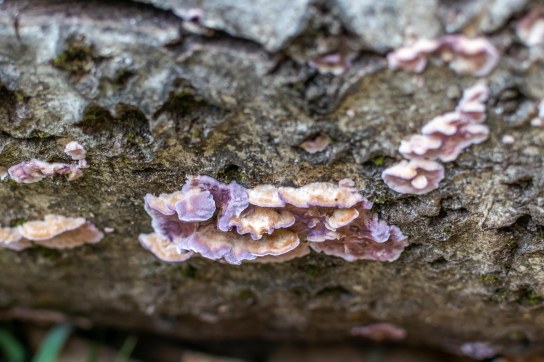 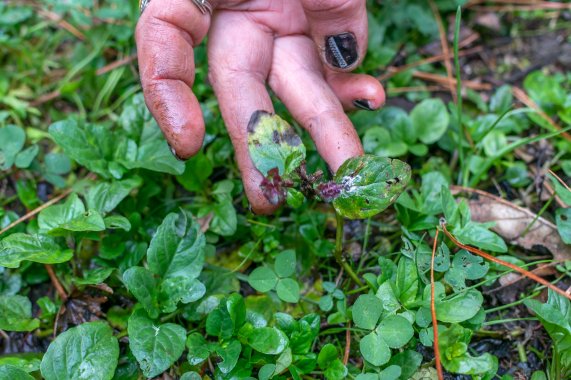 This is about the stage where I mention that you should not eat things that look like this without first getting expert advice (or attending a workshop).  In particular – with fungi, many that look edible (or are known to be edible in other countries) either have toxic lookalikes or have mutated under Australian conditions to something that will quite possibly either make you crook or kill you.  There are numerous counts of fungi poisonings every year in Australia and the 3 tenets of fungi foraging should be observed:

The workshop was topped off with a campfire cooking demonstration and delicious herbal tea.  Ingrid has a fabulous “cheats” creamy fungi dish which she prepares and serves on bread which has also been made from predominantly foraged seeds.  I’m not going to share any of her trade secrets here – you’ll have to attend a workshop to find out (suffice to say it is to die for!). 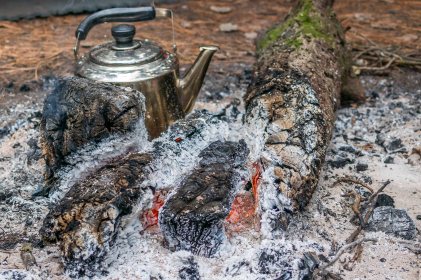 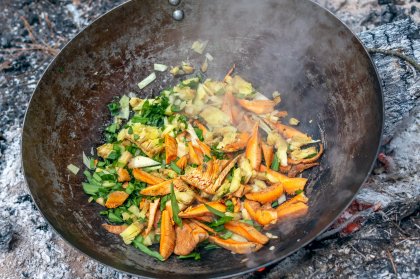 Speaking of workshops, I have since attended 3 more.  As a serial hobbyist with a tendancy towards obsessiveness, the principles of free food foraging really connect with my inner hippie.  Deep down inside I believe we are still primal beings and foraging connects us to the “hunter/gatherer” psyche.

Autumn fest was a celebration of the season.  Held at Taradale Mineral Springs, Ingrid demonstrated how to make acorns edible, then took us on a culinary tour of the area.  Acorns in this region are abundant and I filled a bag to take home for processing.  We were treated with cupcakes made from acorn and other foraged items, topped off with a duck egg cream & rosehip syrup.  I must say I expected them to be quite heavy but they were incredibly light and fluffy.  YUM!  I enlisted the help of family and friends that night to help process my almonds with pleasing results. 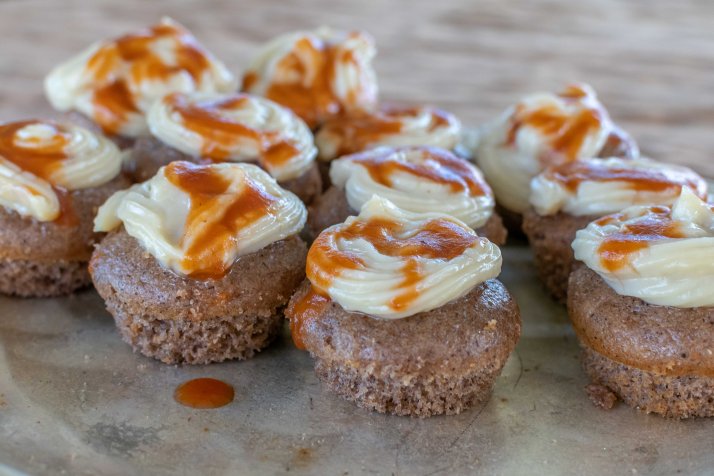 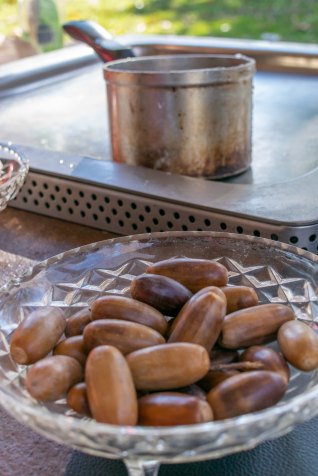 The 3rd workshop was one I was hugely excited about and which certainly didn’t disappoint – Bushcraft Survival with special guest Benedict Leckie.  I had no idea who Ben was but it turns out he’s an accomplished survivalist, bushman, hunter and blacksmith!  Ben led us through the 4 basic components of survival:

Although basic, a knowledge of these 4 skills could be the difference between life and death in an emergency situation.  I’ve been a camper/hiker/survivalist as long as I can remember but even for me a different perspective is always welcome.  I would never, ever say I know everything.  This was a great workshop for enyone who a. goes bush regularly and may get lost or injured, b. loves to push the boundaries in the great outdoors and c. wants an advantage in the event of a zombie apocalpse.

I’m looking forward to learning more from Ben at his next anticipated workshop  – Hunting & Tracking. 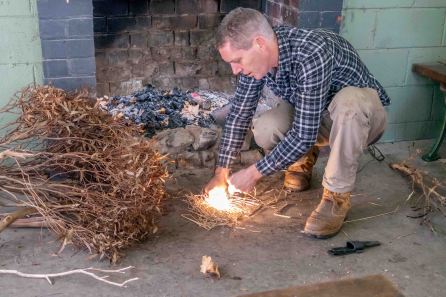 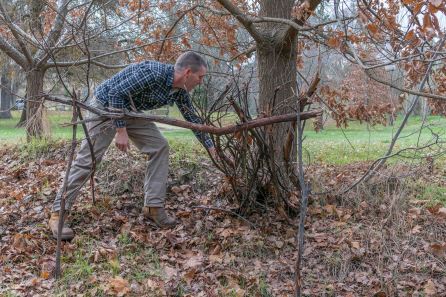 My 4th workshop as at the time of writing was an intermediate fungi identification class – specifically for the “purple nudist” wood blewit.  Once again at Taradale, Ingrid first explained the likely conditions that wood blewits grow in, then walked us to a location she knew was likely to have some. With a delicate lilac colour and fragrance, these beauties fetch $70 AUD a kg.   This is an intermediate fungi which requires some specialist knowledge as there are a couple of convincing look alikes. 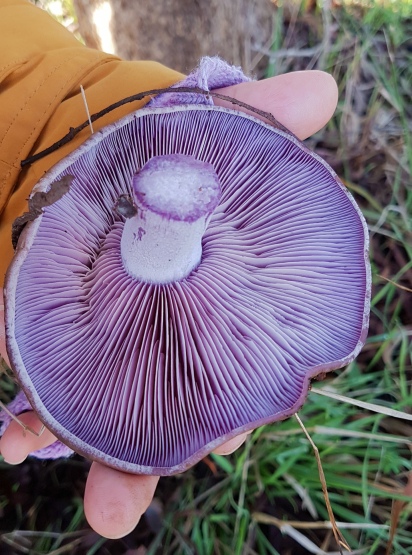 Although the weather was bleak at times, there was a good size group of die hards keen to learn the tricks of the trade.  We walked through cold wind and rain, with Ingrid pointing out other foragables along the way, found a gorgeous ring of these exquisite fungi, then were lucky enough to have a Taradale local, Jane lead us by a patch of slippery jacks & saffron caps on our way back.

Of course no rainy day is complete without a rainbow and Ingrid had this one in the palm of her hand.  Surely a sign from the gods that foraging is the way to go. 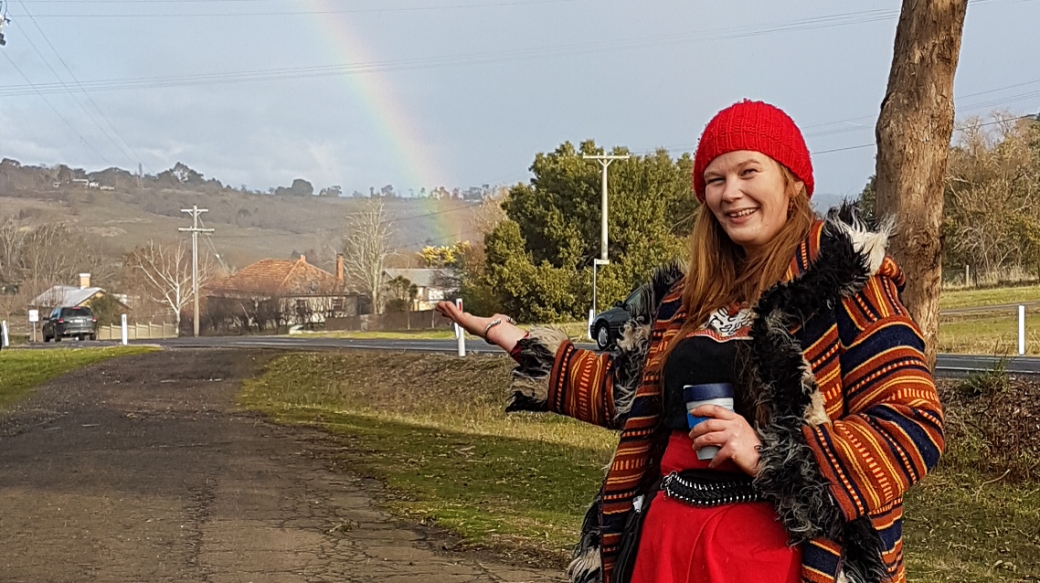 A little about Ingrid.

Ingrid’s story thus far is one of success and is really intersting.  I’m not going to re-tell it here as she does a great job of that herself on her website Free Food Foragers and Facebook page.

What really resonates with me as a life long nature lover and wannabe survivalist is a quote from a recent newspaper interview with Ingrid,  In her own words “For me it’s about getting back into that natural cycle I think we should all be living in.”  A very important aspect of what Ingrid teaches is also sustainability.  People who attend workshops learn the importance of not taking everything that’s available.  Our resources need to replenish and regenerate.  Also, she is lauded by landcare groups as she identifies a number of introduced and invasive weeds.  More foragers means less weeds, and less council resources need to be allocated to weed eradicaton.

From a personal perspective I can see that Ingrid is a born leader.  It’s hard to put into words but it’s as if she’s preaching to the converted but without actually preaching.  Plenty of people who are like minded are seeking this information, and Ingrid is an educator.

It’s not a matter of just having a chit chat about stuff then walking around either.  Ingrid puts an enormous amount of time and effort into planning these workshops.  The outcomes are planned and measured and all add to the building body of research around the benefits of foraging. 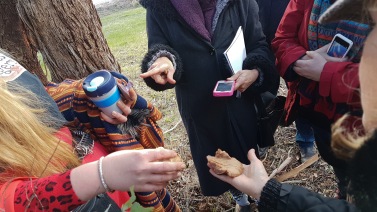 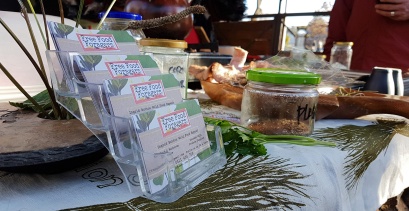 Of course there are many other things that foraged goods can be used for.  I really enjoy using herbs, flowers, water etc that I have gathered on my travels as ingredients in my range of bath and body products.  This has resulted in gorgeous soaps such as “Aireys Inlet”, “Marysville” & “Wimmera”.

Pictured below are some goodies from my new “Taradale” range – fizzy bath cubes with St John’s Wort and soon to be made “Taradale Tea” soap which will have tea made from St John’s Wort, Plantain, Sticky Weed and mineral water fresh from Taradale natural mineral springs. 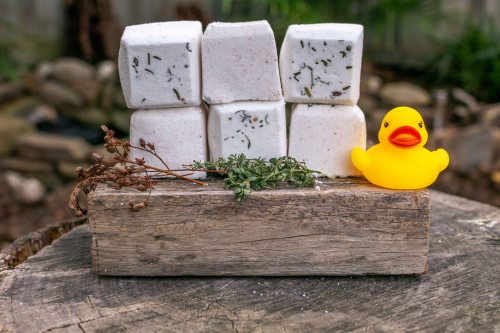 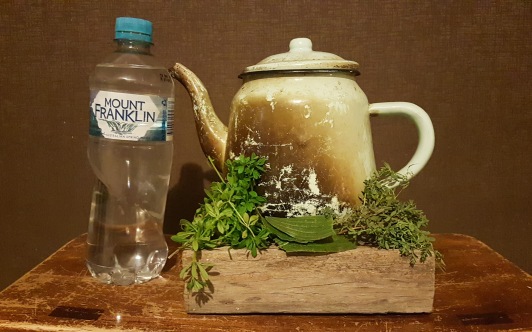 My own personal perspective on how foarging fits into the big scheme of things in a modern world.

As humans have developed technology, we have also become disconnected with our primal selves.  This has been progressing across our evolutionary journey and became accellerated with the advent of the industrial age.

There is plenty of research to support the notion that this disconnection has led to increased sociological issues such as mental ill health and less strong communities.  The very act of foraging for food, processing raw goods and enjoying the fruits of your labour is immensely satisfying.  Touching the earth, the feel of a crisp mountain stream, the smell of fresh air & fresh produce are things lacking in mainstream society today.

Don’t get me wrong – I’m not suggesting for a minute we should turn back the clock.  I’m quite the techno junkie myself, but I do recgnise that yearning within myself for regular check in’s with nature and their importance in maintaining my mental and physical health.

3 thoughts on “Forays into Nature’s Pantry”